“Unusual can be unique,” said Meg Dietrich, who is on the museum’s board of directors. The museum is on Gravois Avenue and sits in the shadows of Das Bevo. The large windmill is a complete opposite of the tiny pieces in the museum.
“It is one inch to one foot. So, we call it 1/12th size,” said Dietrich as she explained the size of the objects. The small pieces in the various displays are exact replicas of their counterparts and most are carefully measured. “Some artisans are very exact. They take measurements with those tiny little calibers,” she added.

Some of the pieces inside the various dollhouses are functional. “There’s a birthday cake with the candles on the cake lit when you turn the lights on,” she said. The miniature homes are put together and fixed up as if an actual human was going to live there. “As if they were decorating a real house,” Dietrich told 5 On Your Side.

​Dollhouses are toys in the hands of children. But adult collectors and artists use them more for creating.
“Amazing what big fat fingers can accomplish in small scale,” said Dietrich. Dietrich began enjoying miniatures as a child and grew up to value them. “I learned to appreciate small things, to take care of small things, to treat them as treasures,” she said.
Dietrich doesn’t get paid as a member of the museum’s board of directors. She and the others are all volunteers. But they take pride in being the caretakers of the collections. Dietrich enjoys learning about the different people who donate their collections to the museum. “Tells a lot about the person, to see what they thought was important in their miniature collection,” she said.

Some of the items they receive are fragile. “There’s a degree of delicacy,” she said. But if pieces get broken, Dietrich said they simply glue them back together. There is a seemingly endless number of items in the museum mimicking scenes of everyday life. “We have many exhibits. There are at least 1,000 all the time visible to be viewed,” said Dietrich. She encourages everyone to come and take a view. “St. Louis people are missing out on a lot if they haven’t been here,” she said. She believes it is one of the best kept secrets in the city. “We have a museum unlike any other museum anywhere,” she said. 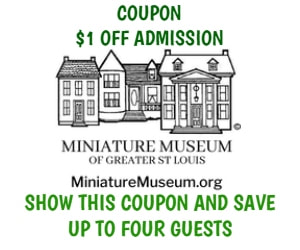